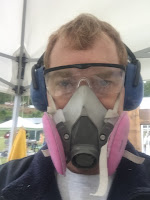 I used to worry about dust collection, now I just worry about dust extraction.  Rock dust is so small that it will clog any decent filter pret quick, and then the whole operation comes to a halt while you clean the filter.

If yr not going to work wet — which really cuts down on the dust and keeps your tools cool — then the other option is to extract, that is: move the dust from where you are at over to where you are not (and, hopefully, neither is anyone else you like). 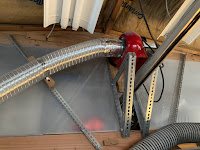 My extraction system is based on a small harbor fright dust collector, a cyclone separator, and a vent out the back into the shrubbery. The shrubs seem to like the attention, and the rock dust enriches the soil. The blower used to have a filter bag, but it just clogged. The unit sits in the ceiling space, and I have it hooked to a wireless remote switch (amzn). It sucks air thru a 4” aluminum duct hooked to the cyclone separator, which is then hooked up with transparent venting (via blast gates) to a couple different workspaces and tools.

Overall it’s fairly quiet at 72dB, way quieter than any power tool I might be using. The sucking power isn’t enough to slurp heavier pebbles or chips, but does get rid of the sandy stuff that grinding tools knock off, and yes, all the dust.

I went through a few iterations over time: initially the dust extractor was just sitting near the work and sucking all the things into the vent and occasionally dinging the fan blade with a larger chip. The filter bag got clogged all the time and cleaning it was a chore. My first foray into extraction was when I forgot to zip the bag after cleaning it: I wondered why it was sucking so much better until the dust come back around. Oof. 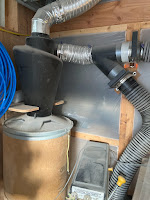 The cyclone separator was an attempt to save the fan blades from rock damage, and it’s done a great job. I had the extractor running on the floor and venting out the door for awhile, but I kept tripping over it so I finally mounted it in the ceiling joist space and ported it out the back. With it mounted higher the chips tend to collect in corners and low spots of the venting ahead of the separator, but that’s easy to dump when it sounds too gravelly.

I have a reducer and vacuum hose attachment so I don’t have to have a separate shopVac taking up space. For non-stone detritus like sawdust and general shop cruft the separator works wonderfully. Another advantage to the separator: when you inevitably slurp up something you meant not to, it’s way more appealing to rifle thru the separator than a vacuum bag (I mean, if you’re going to split hairs).

Since it’s modular, I’ve got designs to upgrade the sucker with a simpler plastic vaned blower for bouncy houses. As long as no chips get into the impeller it should be fine. It has about twice the CFM for about half the price. 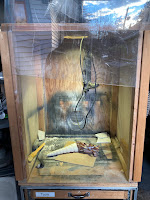 The main thing it’s hooked to is a box that’s conceptually like a blasting cabinet. The box, at 18x18x24”, is somewhat portable so I can have it in a couple places in the shop depending on whether I want to stand or sit while working. There’s a hardware cloth screen over the exhaust port to keep the big chips from getting away. The plexi works both for eye protection and to increase airflow, slides up or down as needed. There’s a light in the top, too. I use Dremels for small work (⅛” bit or smaller) and Foredoms for the heavier work (¼” bits). The Foredom is mounted on an IV stand so I can roll it around the garage. I’ve used the box for spray painting as well, the fumes just go! 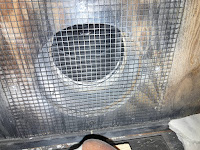 I hope this helps anyone else who has dust problems, let me know if you have questions.